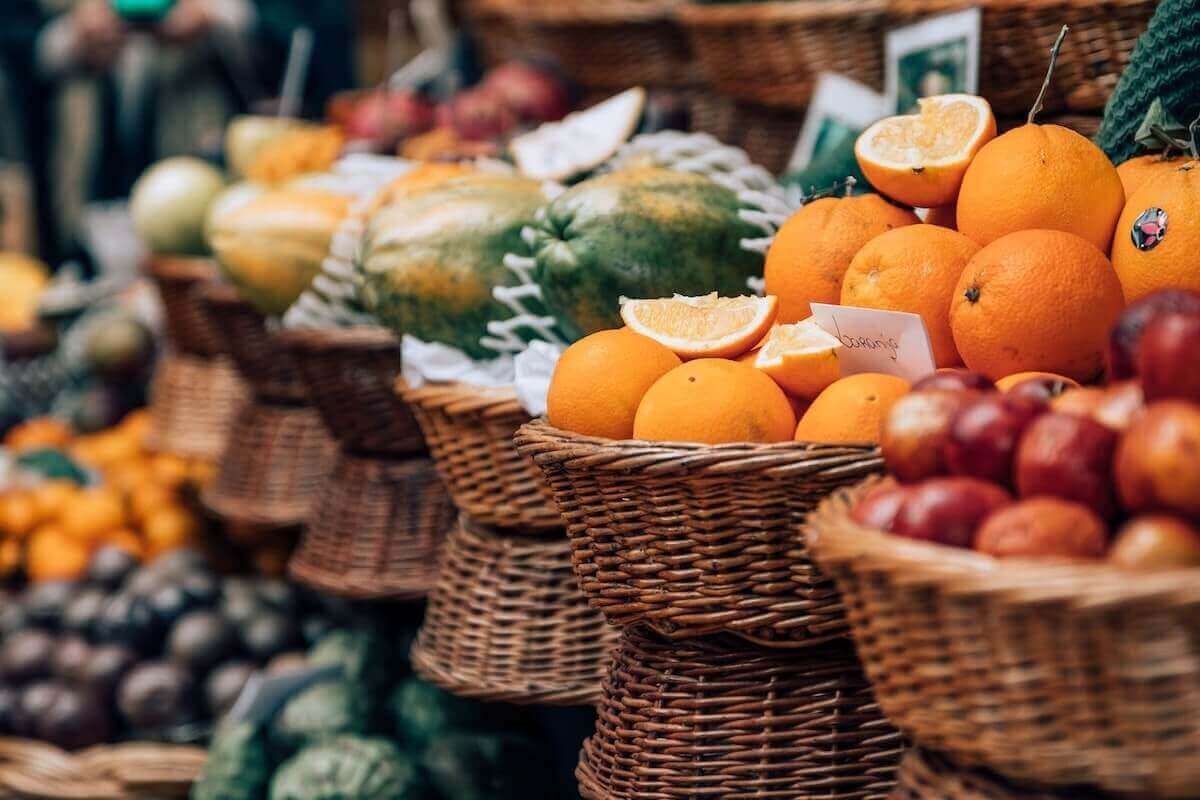 In your visit to the island, you really need to enjoy these 8 typical meals from Madeira Island and this great consumption experience.

Come and discover the typical meals from Madeira Island, this wonderful tourist destination! 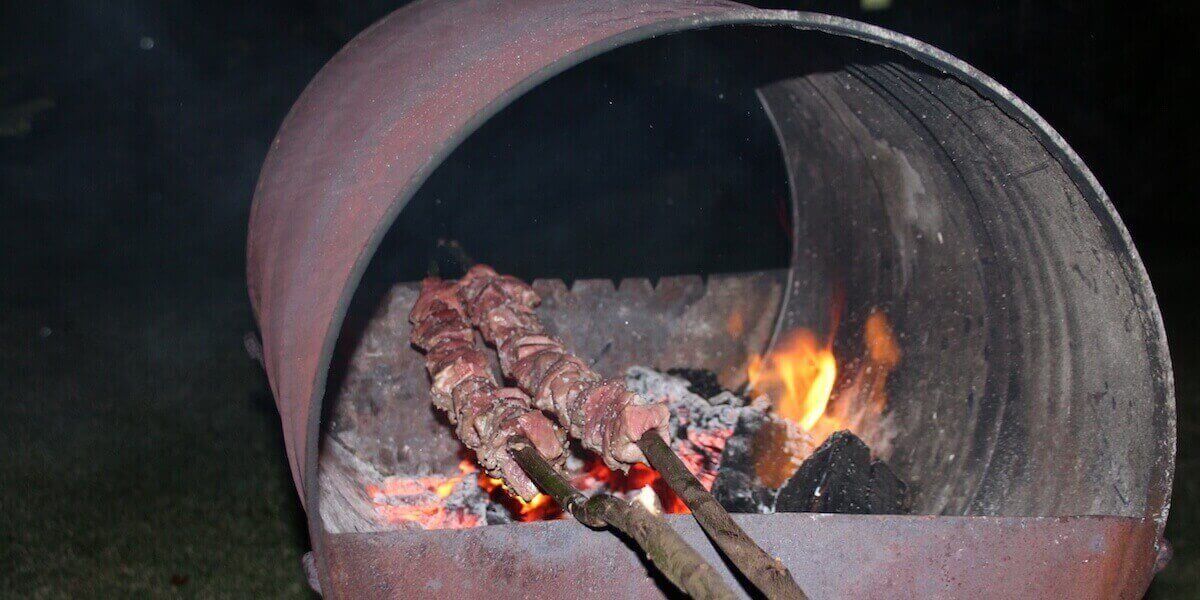 The Espetada da Madeira and bolo do caco is a typical dish from Madeira Island. This is prepared with tender diced beef, garlic, coarse salt and bay leaves, and are placed on the bay stick. Also, it accompanies the bolo do caco with butter and garlic, cooked in the wood oven, salad, french fries and fried corn.

In several restaurants in the island you can experience the local cuisine and taste this dish, enjoying a beautiful landscape of a part of the island and the good and welcoming treatment that is provided to customers.

This meal came on stingrays and festive seasons but quickly impacted the population of Madeira, becoming a traditional meal on the island and also marked the tourists who visit the island and experiencing the well – known espetada em pau de louro. So, the restaurants had to adapt and put the dish on the menu, which quickly generated great demand from the population.

Today, the espetada and bolo do caco are traditional meals, in which attracts many visitors and locals to restaurants. You can enjoy this dish in several restaurants, at a acessible price and become familiar with the population and culture of population of madeira. 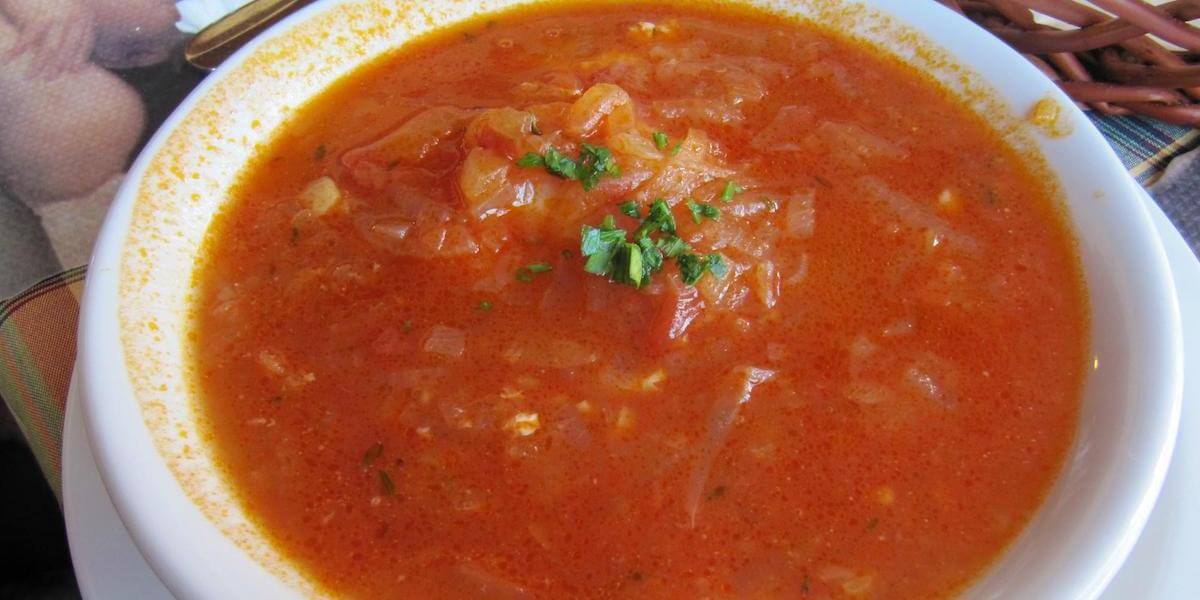 This dish is a reference in local cuisine, being served at any time of the year, although it is more common be consumed in winter. Also, it is a quick and practical dish, without the presence of meat or fish, only eggs that offer the necessary protein and vitamins for your day. This one, have a puree aspect with the color of tomatoes and egg tones and the textures of bread and eggs.

This typical meal from Madeira Island offers you a different experience, it is a soup with little used ingredients in soups. The price is affordable and can be consumed in several restaurants in the region. 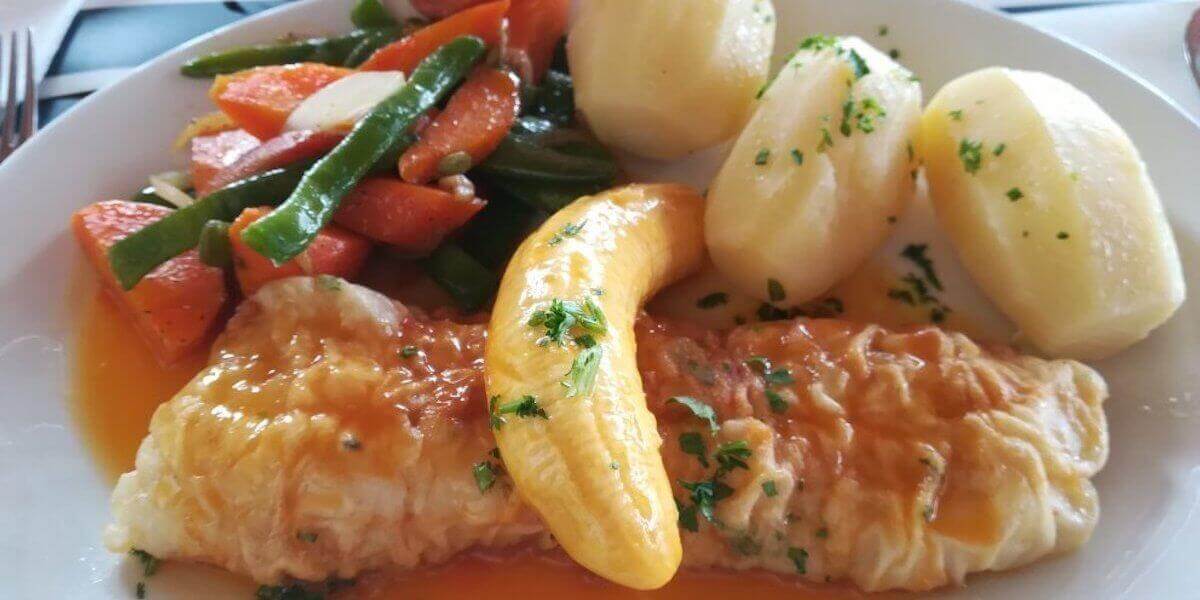 This dish is really consumed by population in the region. In several áreas of the Island are good restaurants serving this traditional dish, although the restaurants of north are recommended. The fillet can be served with boiled potatoes and vegetables or with chips and salad.

The peixe espada preto is the most consumed on the island and prepared in several ways but the traditional one is with banana. This meal can be served in several restaurants, where the specialty is mostly fish. That said, on your visit to Madeira Island, you need to try this typical Madeiran dish, even though it seems a strange combination, it is a dish that will leave you with good memories of the region.

To try this typical Madeiran dish, you can visit the Doca do Cavacas restaurant located in Funchal, Preia Marr located in Madalena do Mar, Maré Alta in Machico, among others, where the service is exceptional and the dishes are of excellent quality. 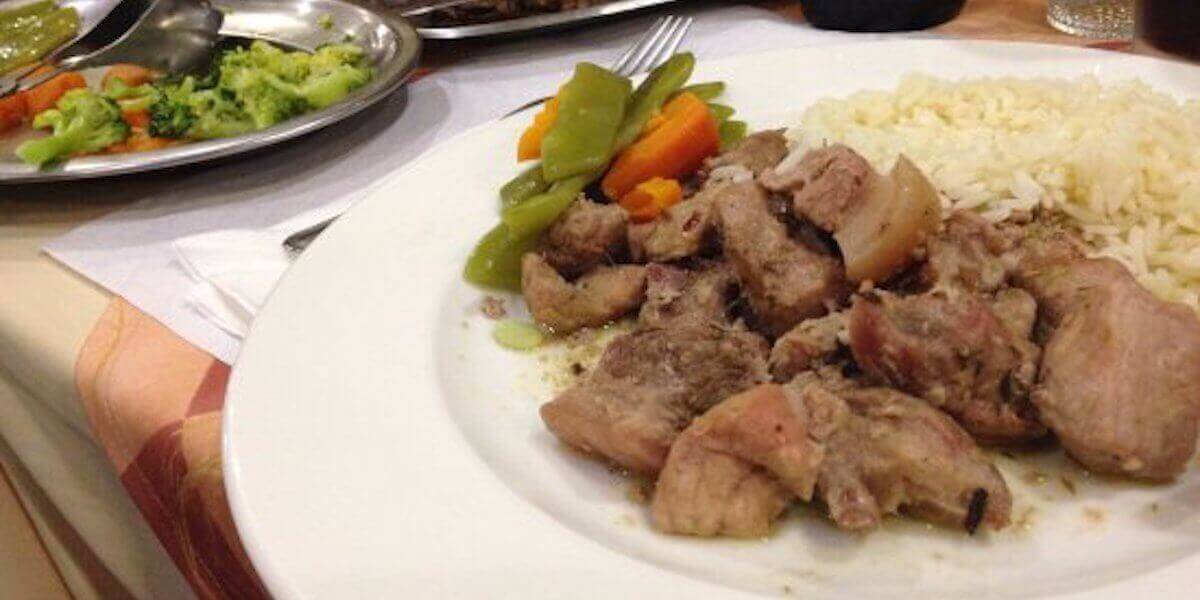 The Carne de Vinho e Alhos is a typical meal on the Madeira Island and one of the best known on the island and is also very consumed during the Christmas season. It is made at home by many population of Madeira, as well as served in several restaurants in the region, where there is a great demand.

This tradition are present at Christmas time and is appreciated by many people, who try to consume this typical food dish every year. The carne de vinho e alhos dish is prepared with diced pork, white wine, garlic, bay leaves, salt, vinegar and pepper, in which it is marinated for one to two days and then fried in lard and served with baked potatoes or other accompaniment of your choice.

This typical food meal is served in several regional restaurants, especially where the specialty is meat, with a name the Vila da Carne restaurant, the O Polar restaurant, among others, in which the service and the meal will be exceptional. 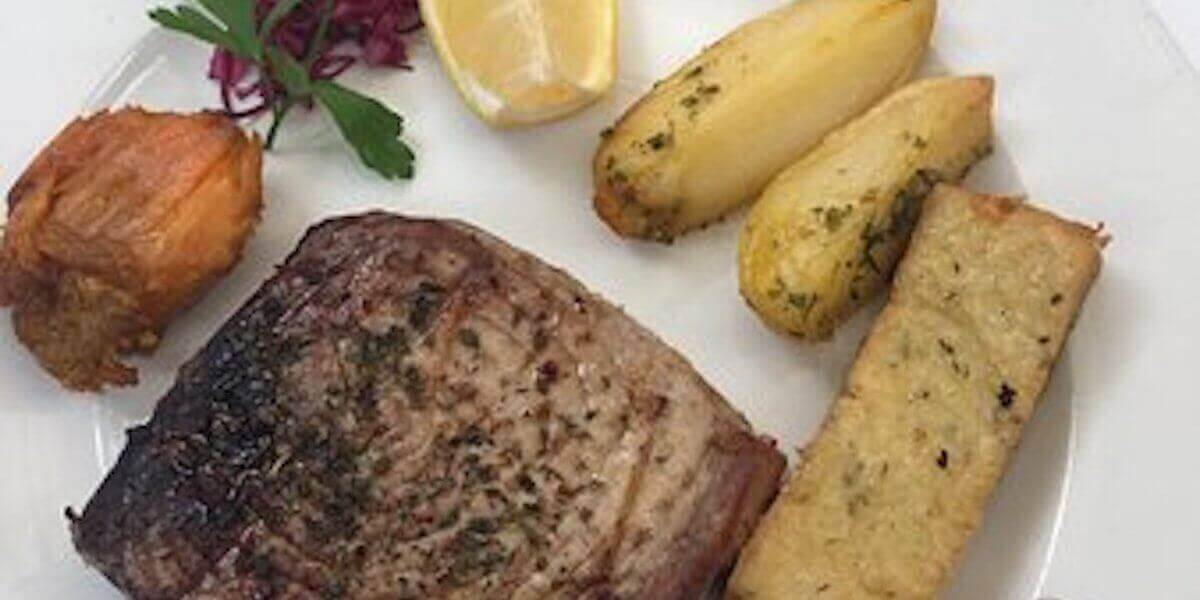 The Bife de Atum com Milho Frito is a dish very consumed in the daily routine of the population of Madeira, served in several restaurants, with a great service to the customer. This meal is well served in any restaurant, although restaurants where the specialty is fish are recommended. At na good price, you can look for a restaurant in the region that will provide you with this consumption experience.

Regarding the way of preparing the dish, the Bife de Atum is cooked in white wine and olive oil, after being well seasoned. The cold cooked corn are in cubes and fried in oil abundant, this dish being served with a salad or other tracking to choose.

You can find this traditional dish in several restaurants in the region, those mentioned in the typical meal, Filete de Espada with Banana, since they are restaurants with their specialty in fish. 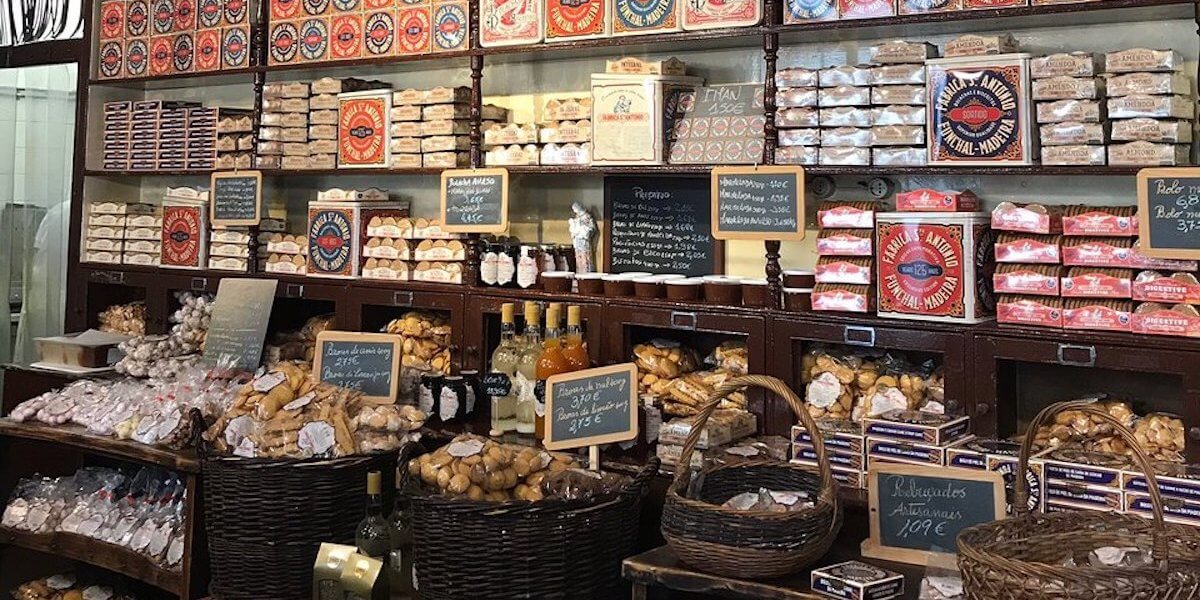 The Bolo e Broas de Mel are regional products very consumed and sold in the region, especially during the Christmas season by the population of Madeira. Appeared there many years and they are in family traditions of Madeira.

Its composition includes açúcar de mel de cana, which refers to the island’s sugar production, as well as the use of spices, such as cloves, fennel and cinnamon, revealing to be a product with different ingredients. Also, this product is most consumed by the population of Madeira during the Christmas season, being a tradition of this time.

The Bolo e Broas de Mel are sold in several places of the region, such as the Fábrica de Santo António, in super markets and hypermarkets as well as in some bakeries. You can also find in some stores of regional products and its price is relatively accessible. 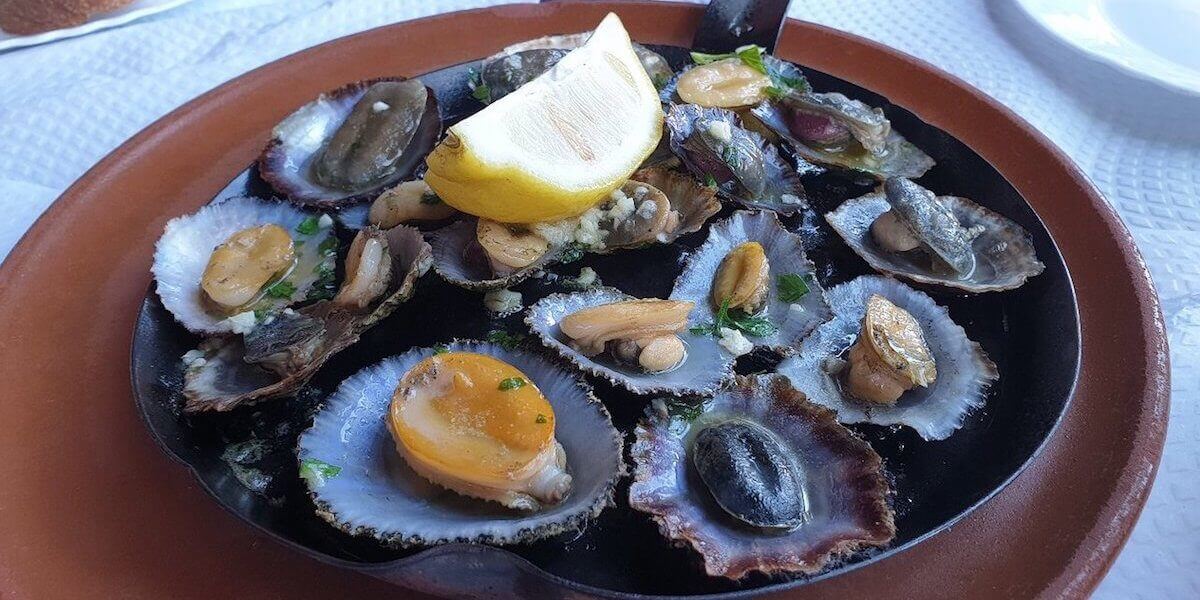 The Lapas of Madeira are consumed mainly in the summer. These are captured when the tide is low, as they remain on the surface of the rocks and can be used in some dishes. When you visit Madeira Island, you have to eat this typical dish, served grilled in a small frying pan, where its sea aroma is unmistakable.

This dish have a simple preparation method in which butter is added parsley and while these grills and, to complete the lime is added. This is the perfect starter to prepare the arrival of the main course, being very appreciated for residents and visitors. Also typically, is the arroz de lapas, very well served in the northern part of the island, which is served as an accompaniment to the main dish.

This meal is a traditional food of Madeira Island, being a very consumed dish and at an good price, will make and taste this grilled mollusk, cooked on rice or both, at any time of the year. 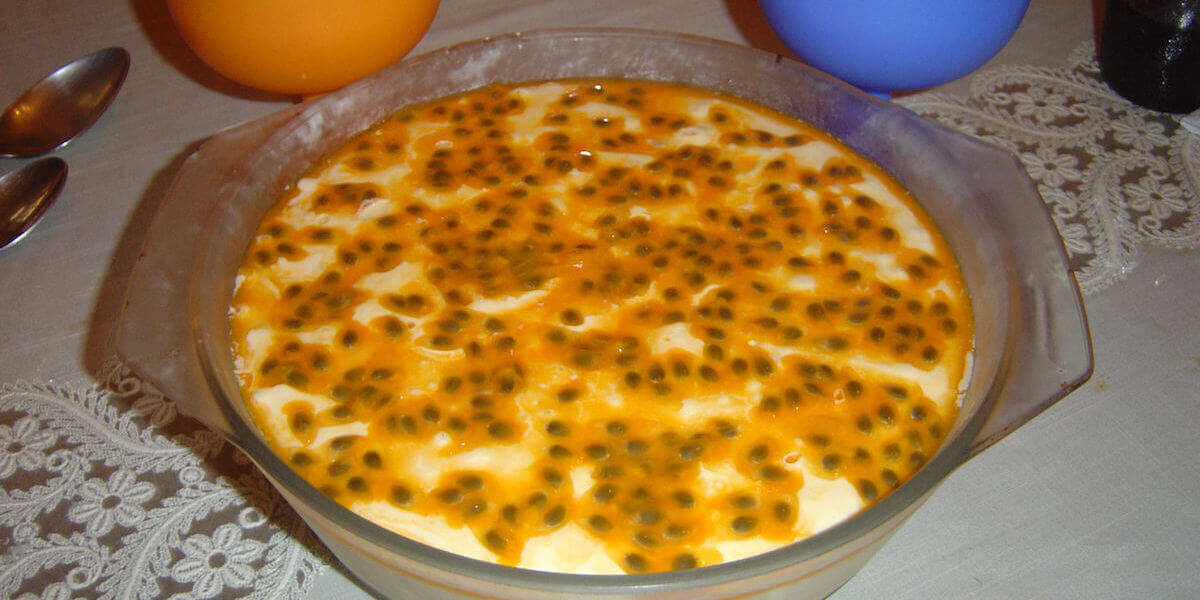 Madeira Island has a subtropical climate, which favors the growth of tropical fruits in the region. The abundant production of these fruits, namely the passion fruit, originated a typical dish of the region, the Pudim de Maracujá, a dessert widely consumed by the island’s residents.

This dish is easy to prepare and the recipe can vary from family to family, but passion fruit is always present as a main ingredient. This dessert is in several restaurants, at various times of the year and is very much consumed by residents as by visitors.

And there are various models of the types of passion, there is a wide variety of desserts, syrups, candy, or even sauces that are made from those. From a sweeter to a tastier taste, this fruit caters for all tastes and is appreciated by everyone.

On Madeira Island with a subtropical climate you will enjoy several memorable meals!

On your next visit to Madeira Island, do not miss the opportunity to enjoy these 8 typical island meals. In here you will appreciate this and others traditional meals of the region.

Do you want freedom of movement in Madeira Island?